To provide footage of both people approaching your door and packages at the doorstep, a lot of video doorbells have strange aspect ratios with fisheye distortion. To get around this, eufy has released its latest video doorbell which contains two dedicated integrated cameras. We test it out below.

Note: eufy provided me with a free sample of the product for the purposes of this review. 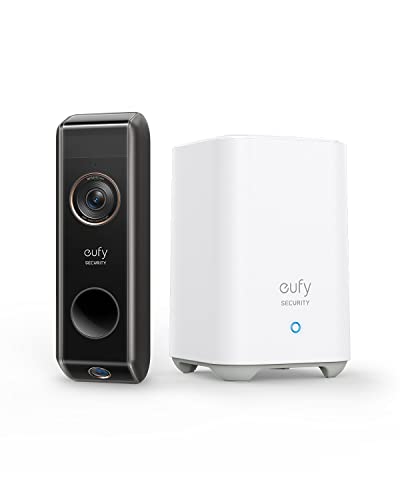 With the eufy Video Doorbell, you get a wider view of your porch without any blind spots thanks to its two cameras. False motion alerts are also dramatically reduced with its dual motion detection technology.

The battery-powered Eufy video doorbell facilitates both hardwired and wireless setups. It pairs with the Eufy HomeBase, which can save up to 16 GB of video footage locally. That’s around 15-25 hours of continuous footage in decent quality which is quite impressive. In addition, it also provides 2-way audio functionality.

The cameras on the doorbell give you a higher viewing angle, with complete visibility of what’s happening on your porch. The front-facing camera captures high-quality video with face detection, while the adjustable porch view camera helps identify packages, keep you notified, and protect your package from porch pirates.

Most users go for the eufy video doorbell dual because it can work well with existing traditional chimes. You can access live footage, save audio messages, and get more personalized notifications with the Eufy security app, which does not require a monthly subscription.

In terms of field of view, the eufy video doorbell dual has taken a step further than most top-of-the-range video doorbells. It comes with two cameras, allowing a full view of both the courier/ person at the door and the package at your doorstep as well.

In addition to the 160° field of view, the front-facing camera provides footage in 2K with HDR. We think the HDR functionality on the camera still has room for improvement since some users complained that the camera doesn’t adjust well to bright lights.

The porch-view camera can be adjusted and squared onto the region where you generally find your packages placed. Get notified on delivery and even get insight on the information on the label thanks to this 1080p camera.

Most video doorbell cameras use either Radar sensors or Passive Infrared Sensors (PIR) to detect motion.

Radar sensors use a modulated frequency to detect subjects that are in motion. They have a large coverage area but fall short when it comes to detecting a stationary person. This is where PIR sensors come into play.

PIR sensors detect subtle changes in heat energy in the area under surveillance. This means it can detect people on the camera even if they are stationary. The downside is that they can detect heat only from within a short distance and therefore, fall short in terms of sensitivity.

The eufy video doorbell integrates both these technologies to give you the best of both worlds.

Purchasing the eufy video doorbell dual is a one-time investment. A lot of video doorbells and smart security cameras require a monthly subscription for extra features and cloud storage.

The eufy video doorbell dual saves footage safely to an internal storage device integrated into your HomeBase. This means your data is transmitted and stored safely in the base even if the doorbell is removed or disconnected.

Depending on the level of activity, the battery power once fully charged should last you between 3-6 months. Taking into account the number of features it has to offer, I think that’s impressive battery life.

The porch view camera comes with LEDs that activate in the dark. These lights cannot be disabled. So if you are planning to use this camera on battery power it might take a slight hit.

When you have to charge the eufy doorbell, you will have to detach it from the dock. If that’s an issue, you could always consider hardwiring the same or switching to a wired-only eufy video doorbell dual if you do not need battery backup.

The eufy video doorbell dual comes with a HomeBase. Since the doorbell is wireless, given the right equipment, you will not have any issues with setting it up yourself. As for the Homebase, you will have to hardwire it to your ethernet. Once done, keep it in close proximity to your doorbell for better network connectivity.

You can easily hardwire it if needed, using the wires that were used for your previous doorbell. The eufy video doorbell dual also works with Alexa Echo or any other existing traditional chime.

There are also two mounting brackets that come with the device; one flat and one angled.

The eufy video doorbell dual provides 2-way audio. It allows you to pre-record voice messages to be played in specific situations.

You could play a recording if someone approaches a package under your doorbell and with the loitering detection feature, you could politely ask a person to leave if they’ve been in view for a while. However, be careful since the maximum time limit for the loitering detection feature to get triggered is 25 seconds. That might be too quick as it could trigger if you are just having a chat with your neighbor at the door.

Using the eufy app you can view both cameras live and without any noticeable latency (As long as the doorbell has a good Wi-Fi signal). The Delivery guard feature notifies you whenever a package is delivered, reminds you to pick it up, notifies you when someone approaches the package, and even allows you to play a pre-recorded voice message when potential porch pirates (or anyone) approach your package!

On your app, you can tap on the package to view more details like delivery time and jump to the footage of it being delivered. Eufy is working on improving these features as they are still not 100%. We can’t wait to see what solution eufy comes up with to detect packages that are placed further away from the porch cam (because you won’t always have packages placed right under the doorbell)

However, it doesn’t support Apple Homekit. If you already use Apple Homekit then you might miss out on the voice compatibility the eufy video doorbell dual has to offer when paired with other smart devices

The eufy video doorbell dual is a great choice for you if you are looking for a video doorbell that doesn’t require long-term subscriptions and cloud services.

Overall, the eufy video doorbell has some great features to offer making it one of the most popular video doorbells on the market.

With the eufy Video Doorbell, you get a wider view of your porch without any blind spots thanks to its two cameras. False motion alerts are also dramatically reduced with its dual motion detection technology.

Is the Ring Doorbell Waterproof?