Fighting weed growth in your vegetable patch or flower bed can feel like a never ending struggle, so a smart weeding robot really do solve a problem for gardening enthusiasts.

Weeding robots, such as the Tertill Weeding Robot, are small self-sufficient devices that can eliminate weeds through daily cutting. 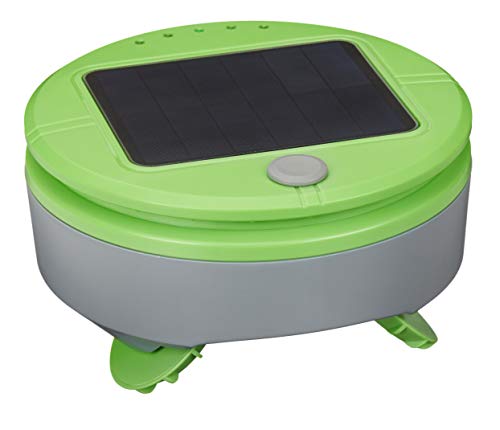 What Is a Weeding Robot?

Weeding robots are automated weed-removing tools designed to eliminate weeds. These tools are generally fitted with tiny wheels to help them move around without needing to be operated by humans.  A weeding robot typically has a strimmer wire to cut down weeds.

While new to the domestic garden, weeding robots have been used in commercial agriculture for years.

The Tertill Weeding Robot can make all the weeds in your garden disappear without you having to lift a finger.

The Tertill Weeding Robot is the first innovative weeding robot introduced to the domestic market. With this device, you no longer have to spend long hours manually weeding out your garden under the scorching heat.

The great thing about this robot by Tertill is it does all the hard work for you, so you can simply focus on planting your vegetables and caring for them. It also features a weatherproof design that virtually allows it to live in the garden all year round.

It comes with a built-in solar panel that keeps it powered and tends to your weeds at all times – as long as it is exposed to the sun. This solar-powered weed robot has two main functions. The first function is to use its wheels to tackle smaller growing weeds. The second function is to use a built-in trimmer to cut off sprouted weeds.

With just a push of the button, this weed-removing robot uses height to cut off grown weeds in your garden running for up to 2 hours a day. It is also fitted with special wheels that were designed to counter the further growth of pre-emergent weeds. The wheels function like a hoe but without disrupting the soil in your garden, pulling out the weeds to prevent them from growing.

On top of that, the weed and seed pulling mechanism of the robot prevents the weed seeds from germinating on the surface, which may continue the growth cycle. For weeds that have already sprouted, the weed pulling tool has a solution as well. It features an on-board whacker string that uses height to chop down the weed sprouts completely – in a continuous cycle – until the weeds completely die off.

While using an accurate whacker, the robot features built-in guards that help shield smaller plants from being destroyed in the process.

To cater to most vegetable gardens, this robot features a fairly generous capacity of up to 200 square feet. Along with the main robot, the package comes with 10 extra plant guards, row guards, replacement whacker strings, and a laminated garden planner.

The Tertill Weeding Robot is still the sole device available for homes today although others may follow suit further down the line. The likes of other commercial weeding robots such as Carbon Robotics and Ecorobotix may perhaps venture into the domestic market with their own offerings.

Is it better to pull weeds or spray them?

While pulling may seem like a time-consuming task, it is a much more effective option compared to spraying. Pulling out weeds straight from their roots helps get rid of them completely without damaging your crops. However, sometimes pulling out the roots doesn’t necessarily guarantee that the weeds will not grow back.

No – there is one device that can be used in the home garden. However, there are still more models designed for commercial use than there are for regular use.

What do I do with the weeds after they have been pulled?

If you have weeds that may potentially be poisonous or invasive, it is better to discard them in the trash. However, non-toxic weeds can be left in a pile to dry up under the sun and then be used as mulch.

The invention of the domestic weeding robot is an innovative step in extending smart home robotics into the garden. They should significantly cut down the time you would normally spend trying to get rid of weeds from your flower bed or vegetable patch, allowing you to get on with more important things!

The Tertill Weeding Robot can make all the weeds in your garden disappear without you having to lift a finger.

Smart Glass for your Home